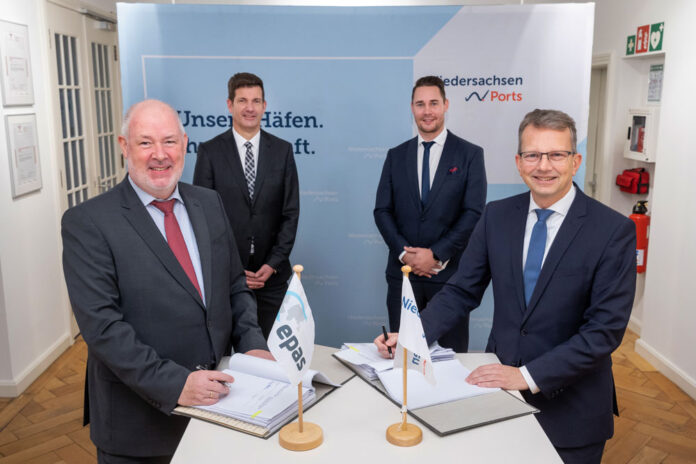 The port company in Emden wins an EU-wide tender

Bulk and bulk goods as well as project cargo are handled at the Südkai in Emden. The service provider in crane operations has been leasing the LHM 420 mobile harbor crane to customers by Niedersachsen Ports GmbH & Co. KG (NPorts) since 2013. It is the core of the contract between Gesellschaft für Hafeninfektur NPorts and Ems Port Agency and Stevedoring Beteiligungs GmbH & Co. KG, better known as epas. The port service provider buys the handling equipment with effect from January 3, 2022 and receives a concession from NPorts to continue crane operations. At the same time, NPorts will rent storage space near the quay on the south quay to the new concessionaire. There the goods are stored, which are handled by crane at the south quay.

“For us it is the end of an era, for epas a new beginning. It was time to carry out a so-called system change. We have clearly organized and regulated the tasks. With this step we are strengthening the seaport of Emden, ”explains Holger Banik, Managing Director of Niedersachsen Ports GmbH & Co. KG and JadeWeserPort Realisierungs GmbH & Co. KG.

The system change in the form of a concession model means that crane operations in Emden will be maintained in line with the port’s public character. All port users continue to have non-discriminatory access to the port.

“As a locally based port operator, we are delighted to be able to further strengthen the performance and redundancy of the Emden port with this service. The aim is to integrate the activities on the Südkai into our organizational structures and to develop them successfully, “says Timo Siebahn – Managing Director of Ems Ports Agency & Stevedoring Beteiligungs GmbH & Co. KG.

In port operations, a distinction is made between infrastructure and superstructure. As a port infrastructure company, Niedersachsen Ports has the task of creating and maintaining berths, quays, tracks of the port railway as well as traffic and operational areas in their ports. The superstructure includes everything that is required on this infrastructure for the operation of the port, for example areas, halls and silos for storage as well as cranes and loading and unloading systems for transshipment. These are usually held and operated by port handling companies.

Up until this year, the ports of Emden and Brake were an exception to the rule. Niedersachsen Ports operated its own cranes at these seaport locations and operated, serviced and maintained them with its own staff. These devices and staff were deployed at the request of the port management company. After crane operations were reorganized in Brake in June 2021, the change in Emden will take place on January 3, 2022.

The number of the originally eleven crane systems on the Südkai has steadily declined over the past few years. The first loading bridges were built in 1926 and have been gradually shut down and dismantled since the 1990s. Most recently, the operation of bridge 11 was discontinued at the end of 2019, as continued operation was no longer economical. The last remaining device is the LHM 420 mobile harbor crane.